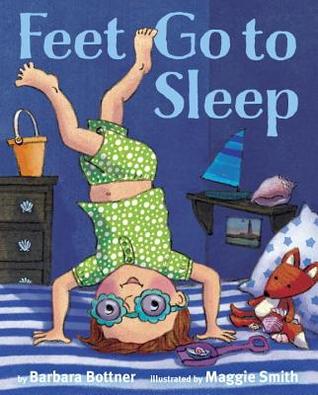 When Anastasia Suen put out a call to kid lit bloggers to join a blog tour to help promote Barbara Bottner’s new book, Feet, Go to Sleep, I was happy to jump on board. To ask one of kid lit’s most illustrious authors a question and to host her here on Frog on a Blog was a chance I couldn’t pass up. Barbara Bottner has had a long and varied career in the entertainment industry, including writing for television. So, I was very curious to know how her experience writing for television has influenced her career as a children’s picture book author. I asked, and she very kindly answered.

But before we hear her answer, let’s find out about her and illustrator Maggie Smith’s new book Feet, Go to Sleep:

From the New York Times bestselling author of Miss Brooks Loves Books! (and I don’t) comes a gentle bedtime book that includes a proven relaxation technique parents can use to help their little ones go to sleep after an exciting day.

The sun has set and dinner is done, but Fiona is still excited about the day and is not at all ready for bed.

So her mom helps her settle down with their nightly ritual of sending each part of her—from her toes to her nose—off to sleep. As Fiona relaxes her body, she recalls a marvelous day at the beach where feet were for stomping in the waves, legs were for running after cousins, tummy was for holding strawberries, and arms were for catching beach balls. And bit by bit, memory by memory, Fiona slips from a great day into a good night.

Barbara Bottner and Maggie Smith create an action-packed day to remember and provide parents with a wonderful technique for helping their own busy little ones drift peacefully off to sleep.

Barbara, how has your experience writing for television influenced your career as a children’s picture book author?

The answer is probably the other way around. I learned from writing picture books how to compress a story, how to deftly draw characters that are vivid, and how to use dialogue. Writing for television came after writing for children. Having said that, I did take a lot from being a TV writer. Things like a tag, which is used in sit-com, is also a great ending note for a picture book story. That last little twist or joke or last image is something in short form TV that’s often there.

Also the format of TV can help me understand when I need to turn the action around in an unexpected way. The truth is, most writing helps most other writing. In writing sit-com, the structure is there independently from the jokes. The structure is dead serious. The logic and progressions have to work. I learned from writing Winnie The Pooh episodes how to create conflict even when the characters are basically mild and benign. With Pooh, there is a droll deadpan humor that was foreign to me until I had to write it. So, a book of mine that comes to mind is Raymond and Nelda, which is quite Pooh like, because the conflict is based on a misunderstanding and an unfortunate moment Raymond has where he laughs at his best friends’ dancing. I probably never would have written that, if I hadn’t had the Pooh episodes under my belt.

Then, I worked for Jim Henson, both in animation and writing lyrics. Writing Sesame Street characters was invaluable because they can be drawn on the head of a pin. Once you ‘get’ the Cookie Monster will always want cookies, you have the core of something. In fact, it would be a great assignment for people to try, to take classical characters like Pooh or the Muppets and write them into other stories. For me, a great deal of the pleasure of writing IS writing character. From character so much comes and vague characters give you a vague experience. My guidepost for years was Eloise. She is so specific and so much fun to write. And once you let loose with her, you are freer to write your own idiosyncratic foibles and make them funny.

The last thing I’ll say about TV, specifically sit-com, is attitude. Sit-com thrives on attitude and attitude in a picture book can take you a very long way. I once shaped a character for a very early book in my career, when I didn’t consider myself a writer, on the phrase, “I won’t.” The book was called Doing The Toledo. And all I knew is that this four or five year old only would say “I won’t.” But it was very resonant to how I was at that time in my life, I was filled with “I won’ts.” So, then I asked the question, won’t WHAT? And I got that she wouldn’t do this tumbling move for her friends. Voila. A story, a very simple story, but real. It was simply based on attitude. So, the cross-breeding of work is very helpful, unless, perhaps, you’re writing for medical journals. Then all bets are off!

Thank you, Barbara! That was truly fascinating!

Frog on a Blog visitors, please visit the other terrific blogs on the tour:

Barbara Bottner studied painting in Paris, worked as a set designer, toured as part of an acting ensemble, and made animated shorts for Sesame Street before turning to writing and illustrating children’s books. She is the author of more than thirty-five books, including the New York Times bestseller Miss Brooks Loves Books! (and I don’t), illustrated by Michael Emberley, and Bootsie Barker Bites, illustrated by Peggy Rathmann. She lives in Los Angeles. You can visit her on the Web at BarbaraBottnerBooks.com.