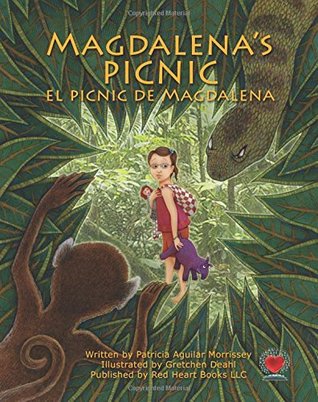 Back Cover Blurb: This story explores a young child’s imagination as it takes her to a faraway place–the Amazon jungle–without leaving her backyard. The main character in the book, the one fearlessly leading the group ahead, is a girl named Magdalena. She is clearly a role model for young adventurers as she dodges dangers, makes bold choices, and finally, leads her group to its destination.

This sweetly illustrated, bilingual (English/Spanish) picture book is overflowing with action, adventure, and fun. Magdalena and her two pals, Brigitte and Junior, set off into the Amazon jungle to find the perfect picnic spot. As they move through the jungle, they encounter chatty monkeys, carnivorous plants, dark caves, and a dangerous anaconda. When Magdalena’s friends are in danger, she jumps into action, bravely saving them from certain doom. But what happens when the trio meets face-to-face with a ferocious jaguar?

Magdalena’s Picnic is filled with edge-of-your-seat action, with danger around every bend. And all of it comes from Magdalena’s wild imagination. This book does an excellent job of reflecting how real children play and imagine the world around them. In a child’s world, a sprinkler can be a waterfall, a garden hose can be a snake, and that dark, damp area under the porch can be a cave. And a child can be the hero in her own story.

At the back of the book, the author has included some information about the Amazon jungle and the animals that can be found there. The book’s a great choice for Spanish and English speakers, ages 4-8.