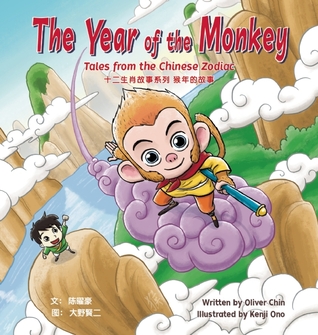 Title: The Year of the Monkey: Tales from the Chinese Zodiac

Summary: The monkey Max befriends the boy Kai, as well as other animals of the Chinese lunar calendar, and demonstrates the qualities of an adventurous spirit.

In this 11th book of the Tales from the Chinese Zodiac series, we meet Max, the spirited young son of the Monkey King and Queen. Max is an unwavering bundle of energy with a sparkle in his eye and a zest for life. He just can’t seem to sit still. What he needs is a way to channel his energy. He finds the perfect outlet in the game of Jianzi.

He and his friend Kai practice very hard. They are determined to enter the Jianzi tournament. But can they win against Tiger and Dragon, the best team in the land? Maybe if Max uses his special move they can!

Were you born in the Year of the Monkey? Are you like Max, playful and mischievous, but also determined? Before Max learned to channel his energy, he was a little bit naughty, but never mean-spirited. He’s super sweet and super adorable (just look at those big eyes). His vibrant personality befits the son of a legendary prankster father and a wise mother.

The story is very well written. It’s wordier than the average picture book, but the action keeps the story moving along nicely. Simplified Chinese text is also included on each spread. The bold, bright illustrations are a perfect match for the lively, action-packed story. And I really like some of the unusual angles the illustrator used for the Jianzi match against Tiger and Dragon.

Final thoughts: The Year of the Monkey is a fun, colorful, adventurous story of friendship, spirit, and determination, and a great addition to the Tales from the Chinese Zodiac series.